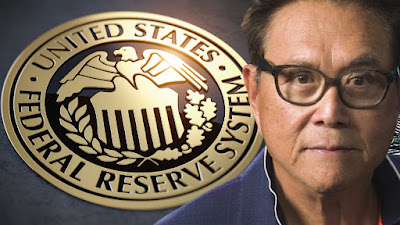 The famous author of the best-selling book Rich Dad Poor Dad, Robert Kiyosaki, has warned that the Federal Reserve and the Treasury are destroying the U.S. dollar.

Noting that they are sending billions of dollar savers and uninformed investors to “financial hell,” he advised, “Save gold, silver, and bitcoin.”

Robert Kiyosaki, the author of Rich Dad Poor Dad, tweeted this week that the Federal Reserve and the U.S. Treasury Department are “destroying the dollar.”

Rich Dad Poor Dad is a 1997 book co-authored by Kiyosaki and Sharon Lechter. It has been on the New York Times Best Seller List for over six years.

More than 32 million copies of the book have been sold in over 51 languages across more than 109 countries.

"Fed and Treasury [are] destroying the dollar sending billions of dollar savers and uninformed to financial hell. Go to financial heaven. Save gold, silver, and bitcoin."

This is not the first time the famous author has warned about the Fed and the Treasury hurting the economy and individual investors.

In December last year, Kiyosaki tweeted a warning that the Fed and U.S. President Joe Biden are “pushing fake inflation.” He predicted an imminent, massive crash that will be followed by a depression.

Kiyosaki also said in October last year that Biden and the Fed are “ripping off poor people,” reiterating that the U.S. is sliding into a depression.

“Inflation rips off the poor. Inflation makes [the] rich richer,” he stressed. The famous author also tweeted in the same month:

"I love bitcoin because I do not trust [the] Fed, Treasury, or Wall Street."

Kiyosaki has been recommending that investors buy gold, silver, and bitcoin for quite some time.

In January, the famous author said it was great news that the price of bitcoin was crashing.

He added that he will buy more BTC when the price of the cryptocurrency tests $20K. In November, he said he will also buy ether as inflation fears escalated.

This article is excerpted from several sources as a news clipping and informational purposes only. CDSafe and editor of article do not accept culpability for losses and/ or damages arising from the use of this publication.